Our newest board member, Miguel Solis, couples a passion for public service with deep expertise

By Victoria Salinas, Vice President of Programs and Communications 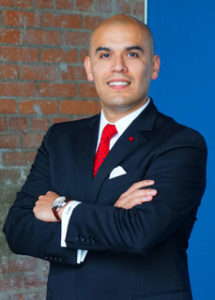 Our newest board member, Miguel Solis, couples a passion for public service with deep expertise in education policy and community-based economic development. He is the current executive director of Coalition for a New Dallas, which reimagines a Dallas made up of neighborhoods where jobs and basic services—housing, transit, schools, parks, and retail—are available within a short distance that is navigable by everyone. As part of our Behind the Board series, Victoria Salinas, FUSE Vice President, had the chance to dive deeper into his personal background and learn more about the inspiration behind his commitment to public service and community development.

VS: Why did you decide to join the FUSE Board of Directors?

MS: When I learned about FUSE, I was hooked. Any time I have an opportunity to engage with smart people doing really cool work in local government across the United States, I’m in. On top of that, FUSE fellows are bringing innovative, non-traditional approaches to government which is desperately needed.

VS: What inspired your career in public service?

MS: In some ways, I was raised to be a public servant by my mom and dad. They realized the power of community—both what communities can do for people, and what people should do for their communities.

I’m from Port Arthur, Texas, a small town right on the border of Louisiana. My dad was a public-school teacher and small business owner. Growing up in a town where everybody knows everybody, my dad knew some of the people that were running for school board. So, he would take me to go knock on doors to campaign with them, and then take me to school board meetings to watch these people that we helped get elected actually make decisions. Later, I would go with him to Chamber of Commerce meetings. He wanted to show me the power that one person could have in their community, and how important public service is in shaping the possibilities for our community.

Through these early experiences, I became a kind of government, public sector nerd. But I didn’t necessarily know that’s where I’d end up. I became more involved in government my senior year of college, when I volunteered on then-Senator Barack Obama’s presidential campaign. I went to work with the campaign full-time the day I graduated. I trekked out to Bloomington, Indiana—a place I had never been before—to help Barack Obama win the state, which had not voted for a Democrat since it went for LBJ in 1964 and was one of the birthplaces of the Ku Klux Klan. That was daunting!

“He wanted to show me the power that one person could have in their community, and how important public service is in shaping the possibilities for our community.” – Miguel Solis, FUSE Board Member

But the experience gave me a more tangible sense of what public service could be. I went on to work as a public-school teacher in Dallas as part of Teach for America, a nonprofit that recruits educators to teach in low-income communities. After that, I got my master’s in education and public policy and returned to Dallas. At the age of 27, I ran for the Dallas school board. And from that point forward, I’ve been deeply engaged in public policy— education, but also housing, transportation, economic development, and more.

VS: Effecting change as a public servant can be challenging—like Sisyphus pushing the rock up the hill for eternity. Can you share a bit about what keeps you motivated?

MS: It’s funny that you bring up Sisyphus, because the French existentialist Albert Camus’ “The Myth of Sisyphus” has been one of my greatest inspirations during my public service! I’m specifically drawn to Camus’ idea that, by the end of our lives, we may not accomplish everything we wanted. But just the act of being in the moment, of doing something, of moving something forward, like Sisyphus did, is powerful in its own right. Remember, he never gets the rock to the top of the hill, but he keeps going because this act of trying and moving forward is where he finds meaning. This is what drives me when problems seem insurmountable.

I also think, if we don’t do something about the problems that we see, then who’s going to do it? That’s what’s so exciting to me about FUSE. There is no doubt in my mind that FUSE fellows are making progress on deeply entrenched issues. Public bureaucracy is its own steep hill to climb. Bringing in FUSE fellows who can offer a different approach to overcoming that is really powerful.

VS: The pandemic has affected communities in lasting ways. What kind of impact or trends do you envision in the decades to come?

MS: The impact of the pandemic on learning can’t be overstated. In Dallas, half of our kids have lost learning in mathematics and more than a third have lost learning in reading. That kind of staggering learning loss demands revolutionary thinking, not just business as usual. Yes, we need to think about internet connectivity, hotspots, reopening, teaching. But we have to go further than that. We can’t just go about things the way they were done before, just with more technology.

“There are some really transformative conversations taking place across the country right now. In Dallas, for example, we passed a $3.5 billion school bond. Nestled within that is targeted reparatory funding for communities harmed by policies like federal redlining.” – Miguel Solis, FUSE Board Member

In Dallas, it took a lot of innovative thinking—the kind that FUSE Fellows bring to the table—for the district to start thinking outside of the box. Prior to the pandemic, we knew from data that a certain population of kids was going to fall behind during the summer because they don’t have access to the same educational opportunities as other kids. That’s when inequities really start to take hold and the pandemic is likely to exacerbate that. So, the district is moving toward a year-round calendar at least for the next two years. That way, we can use those summer months to provide targeted remediation for students who are falling the furthest behind. But it’s not just going to be more of the same curriculum. It’s going to include outdoor opportunities, art, STEM. The idea is to provide a comprehensive social-emotional support system that isn’t only focused on academics, but also healing after more than a year of trauma.

I also think the pandemic has crystallized the problem of racial inequity, because we know that Black and Brown communities have been disproportionately affected. There are some really transformative conversations taking place across the country right now. In Dallas, for example, we passed a $3.5 billion school bond. Nestled within that is targeted reparatory funding for communities harmed by policies like federal redlining. We’re essentially going to use school facilities to build out neighborhood infrastructure—grocery stories, health clinics, and the like—in communities where that infrastructure is lacking.

So, these are some of the things I think we’re going to be seeing a lot more of—cutting edge thinking about things like learning loss and mental health, and more targeted, concerted efforts to address racial inequity in our communities.